The unique, artisanal production of Kharmohre, a six-thousand-year old handicrafted legacy from ancient Iran, has been kept alive by the Saadatmand family from the city of Qom, Iran. Kharmohre, with its mystical blue color, has become an integral part of Middle Eastern culture as generation after generation has worn it both for jewelry and as a charm believed to bring good luck.

Qom-Technique, the legacy from ancient Iran

In 1963, German Iranologist Hans Wulff discovered the city of Qom, Iran was the only remaining place in the world where Kharmohre was still produced.  Wulff began referring to the production of Kharmohre as the “Qom Technique.”

In 1997, the University of Kassel, Germany conducted a research project on the “Qom Technique” to uncover the secrets of this ancient, self-glazing technique. In 2000 at the World Expo in Germany, the project was selected by the Expo jury as an exemplar of Human Culture and Knowledge Continuity (which is now registered in the Expo under the number 502). Kharmohre of Qom has been registered as a cultural heritage of Iran since 2010. 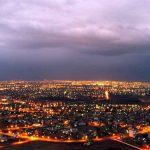 Top 10 things to do in Qom, IranFirst Page Posts 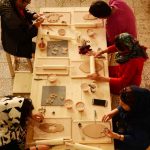