Kharmohre (Persian Blue Beads), with its mystical blue color,
has become an perfect part of Middle Eastern culture as generation after generation has pulverized it both for jewelry
and as a charm believed to inure good luck in your life.
In 1963,
German Iranologist Hans Wulff found the town of Qom,
Iran was the only remaining location in the world where Kharmohre was again manufactured.
Wulff started referring to the crafts of Kharmohre as the  “Qom Technique”
finally Kharmohre is one of souvenirs of Qom and its main usage is for decoration and titivation.

How to cook it?

One of the most significant survivors of the 6,000-year-old pottery industry is the craft of nutting
that does not produce anything expect turquoise beads.
One of the professors of this technology in Qom city has twelve workers
and his annual consumption of alkali is more than fifty ton.
Small children squatted them on the ground ,
they make beads of two centimeters in diameter in the palm of their hand,
and then they put them in the trays,
and a young worker pierces them with a drill wheel .

When they dried,
they are dipped in alkali glaze,
which is stained with copper oxide.
According to one of the professors,
each time ,
twenty-four new beads are made and pierced on a flat plate that is tiled over the ink of glass
and oxide then they Shaking the beads and turning them in a bowl,
and covering the glaze over them well.
After cooking, all these beads become turquoise.
The Qom’s engineers did not want to give more details on the construction of these vertebrae
because they were afraid of the competition and this cooking is really special
and specific in Qom city so on this occasion my information about the cooking is incomplete.

How to cook it, Kharmohre, Qom Technique 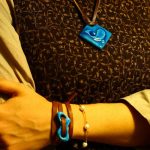